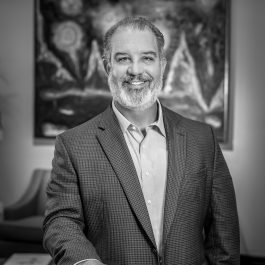 Derek E. León is a founding partner of León Cosgrove LLP and a Chambers-ranked commercial litigator who has tried numerous complex cases to verdict in state and federal courts across the country.

Derek co-founded the litigation boutique León Cosgrove LLP in 2013 as a new value proposition in commercial litigation after a decade of accomplishments as an equity partner at a perennial top-10 international law firm.

For a decade, he managed a national litigation practice from Miami and Houston offices, during which he successfully tried numerous cases to verdict across the U.S.; co-chaired a firm-wide global Retail Practice Group; and led IP Disputes, Insurance Recovery, and Products Liability practices in Florida. In 2005, Mr. León became one of the youngest associates ever to be named partner from within the 1,400-lawyer firm.

Derek began his career as a trial lawyer in 1997 at one of the most prestigious litigation powerhouses in Houston, where he successfully tried several cases to verdict in state and federal courts throughout Texas. He maintains deep roots in the Houston area in addition to his Miami base of operations.

From 2010 to 2013, he served as General Counsel to the Congressional Hispanic Caucus Institute, a non-profit organization based in Washington, D.C., and led by U.S. congressional leaders and senior executives from numerous Fortune 500 companies, all dedicated to developing the next generation of Latino leaders.

In 2006, he founded LegalLine of Miami-Dade, a free and anonymous legal advice community hotline sponsored by the Dade County Bar Association and has served as LegalLine’s chair since inception. In 2008, LegalLine garnered a prestigious pro bono award from The Florida Bar and was recognized as the best pro bono program in the state. Derek is also a graduate of the Greater Miami Chamber of Commerce’s “Leadership Miami” program and is a long-time member of the GMCC.

Featured Artist
We proudly feature the paintings of Brian Rutenberg, who inspires all of us through his unique passion, dedication and singularity of vision. Brian has been a client and a friend of the firm for many years. We encourage you to experience Brian’s work which is such an inspirational display of self-expression at www.brianrutenbergart.com.